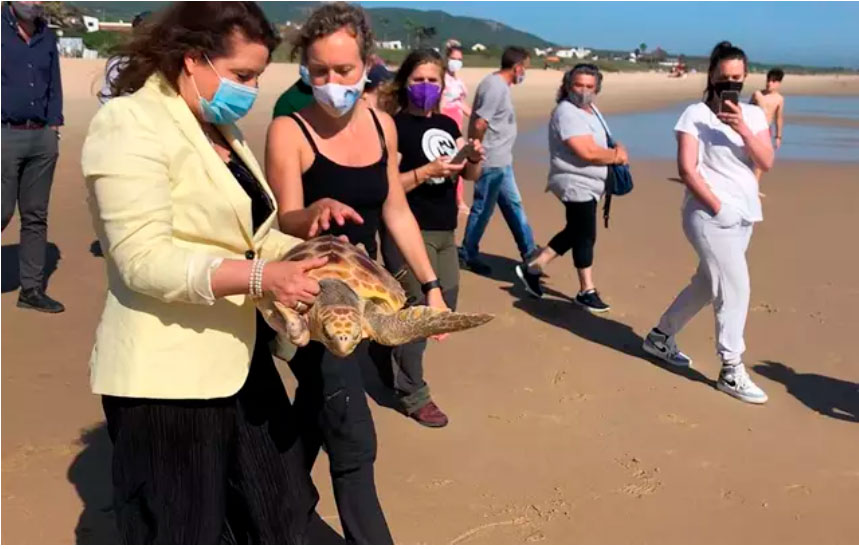 Crespo releases on the beach of Bolonia a loggerhead turtle recovered at the Cegma of Algeciras from the wounds in one of its flippers.

The Andalusian government will finance with five million euros research projects to combat marine debris and advance the sustainability and protection of the Andalusian coast. It will be through a collaboration agreement to be signed with the Campus of International Excellence of the Sea (Ceimar), which promote Andalusian universities, the Portuguese Algarve and Morocco.

This was announced Thursday by the Minister of Agriculture, Livestock, Fisheries and Sustainable Development, Carmen Crespo, in the Cadiz beach of Bologna, where he released a specimen of loggerhead turtle, recovered in the Center for Management of the Marine Environment Andalusian (Cegma) of the Strait of wounds in one of its fins.

Crespo, who has detailed that this initiative is carried out in the framework of the Ecomares project to protect the coast together with the fishing sector, has pointed out that this collaboration agreement seeks to “take advantage of the knowledge and talent of the university community to open new ways that allow us to continue advancing in the sustainability of the coasts and the Andalusian seas”.

In this sense, the counselor has stressed the need to “raise awareness and sensitize society to the importance of caring for marine biodiversity and protect our coastline.” “With simple daily actions we can contribute to prevent marine debris, especially plastics,” she remarked.

In the last two years, a total of 13 sea turtles that were stranded along the Andalusian coast have been returned to the natural environment, after entering the recovery centers of the Board. The specimen that the counselor has released this Thursday on the beach of Bolonia has remained the last year in the Cegma del Estrecho, in Algeciras, after being found injured on the beach of Chipiona to be entangled in a fishing line. Despite losing two thirds of one of her fins, she is now strong and in good health to return to the sea. When she was rescued weighed just over six kilos and now exceeds nine kilos.

The counselor stressed that with this release “the Andalusian Government visualizes its commitment to the preservation of the rich biodiversity of the community”, which is one of the cornerstones of the Green Revolution undertaken by the Executive presided by Juanma Moreno.

Between 2019 and 2020, 21 turtles were admitted to the Junta’s recovery centers. Sixty-nine percent were due to natural causes and 26 percent for reasons of anthropogenic origin.